Kevin called, this morning, to beg a garage in which to fix Molly’s scooter. I thought maybe she needed it to get to some new job but I was, sadly, mistaken. He arrived at 11 and I set him up, discovering yet another use for Monica’s invention (see picture). Used the one nearest as a ramp to get it up there. 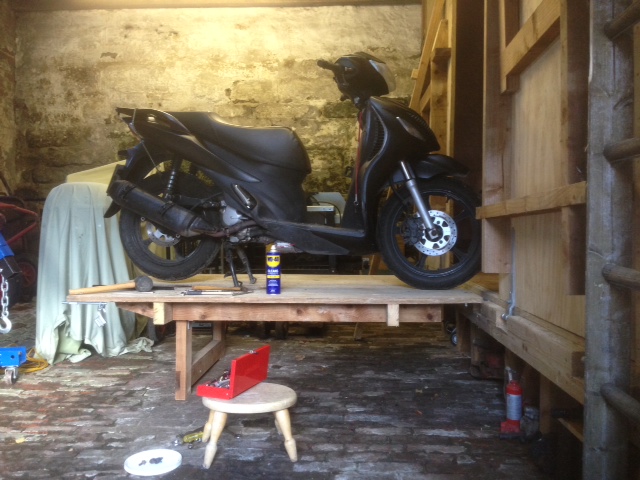 While he was working, I moved the new firewood somewhere tidy, rescued the plastic mulch, again, and put more varnish on the kitchen clothes hoist. I also fed him and Ralph with pea and ham soup and tea. Kevin helped me carry the windows over behind Angela.

Ralph came to beg a couple of screws for the cellar door he’s spent a week making. This is the last step of a job he hasn’t enjoyed in a damp environment. Karin had just visited to tell him she didn’t like his work so he was a bit down. No after effects from Thursday evening, though. They’re going for a day visit to Susan in Keswick; it’s all she can handle just now. I suggested they arrive with a shopping basket of food and essentials.

Around 4 o’clock, Kevin asked, “How am I going to get home?”, meaning he always planned to cadge a lift. As we arrived in Bacup, he announced that his car was in Stackie so I had to take him further. Hey ho. At least he tidied my tools away.

After that, Bandit and I surveyed the canal signage for the Trust because they want to know how many wrong logos they have to change.

Tonight I’m trying out Blackbark’s firewood. It’s wet after a few nights of rain but seems to be burning ok. It’ll be nice to get rid of all this rubbish and back to solid logs that burn long and slow.

Bandit cleaned a lot of pea and ham bowls yesterday and today so she’s happy.